We need you! See something you could improve? Make an edit and help improve WikEM for everyone.

Lack of evidence suggests that these tests currently should be used ONLY FOR RESEARCH purposes in regards to trauma-induced coagulopathy.[1]

Although TEG and ROTEM measure the same coagulation functions there is a different naming convention for each device.

Features of a TEG Curve

Represents period of time of latency from start to initial fibrin formation due to effects of Factor VIIa and Tissue Factor.

Measures the speed at which fibrin build-up and cross-linking takes place (clot strengthening), and hence assesses the rate of clot formation.

A function of the maximum dynamic properties of fibrin and platelet bonding via GPIIb/IIIa and represents the strongest point of fibrin clot and correlates to platelet function: 80% platelets; 20% fibrinogen. 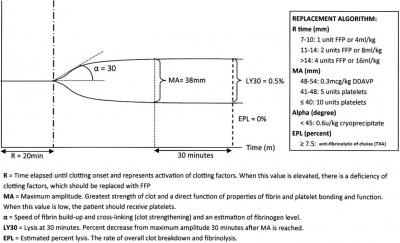